Home / Al-Mishri: Tripoli is Libya’s capital, Sirte is neither secure nor unbiased

Al-Mishri: Tripoli is Libya’s capital, Sirte is neither secure nor unbiased

The Head of the High Council of State, Khalid Al-Mishri, said any way out of the current crisis must go through the correct channels in order to be immune to appeal, adding that the political impasse is caused by fundamental and real issues among the parties.

Al-Mishri explained in an interview on TRT Arabic that the Libyan law prohibits military officers from working in politics, rejecting fitting the law to suit a certain person.

He said Haftar committed crimes against Libyans in east and west Libya, rejecting the candidacy of any military personalities to political work, reiterating remarks on the designation of Fathi Bashagha by the House of Representatives (HoR), and saying the designation is rejected by its current form as the government’s cabinet isn’t balanced.

“Tripoli is the capital of Libya and no government can work from other cities. We reject to have Sirte as a headquarters of the government as it is unsafe and unbiased because of the presence of Wagner Group. We fear war and we don't think that Fathi Bashagha government will stay in Sirte for long. The solution is in tackling the impasse because fighting is still a threat.” Al-Mishri said.

Regarding the percentage of achievement in the current constitutional track, Al-Mishri explained that the Cairo meetings are a way to come up with a constitutional rule, not an amended constitution, and that “the body that wrote the draft constitution is an elected body, and we cannot amend its work, this is not within our authority.”

"What is left to achieve the basis s related to the requirements for candidacy and the provisions of the transitional phase, local governance and informal communications with the House of Representatives. It is possible to reach 95% of the completion rate in the constitutional basis, and for those who expect a deadlock as regards the army and conditions for candidacy, they should know that it's not an impasse through the High Council of State and HoR, but rather via a political vision representing two political parties in Libya.” He explained.

He said they have a dispute regarding dual nationals and judicial rulings, adding that he is optimistic about reaching a certain framework that guarantees a minimum level of consensus.

03-12-2022
President Bazoum: Libya has become an open-air market for weapons

24-11-2022
Borrell: No indications of an agreement on elections in Libya 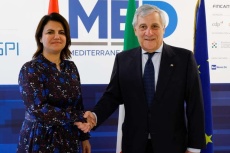