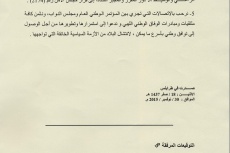 The General National Congress denounced the recent speech by the Head of Tobruk Parliament Aqailah Saleh in the UN General Assembly describing it as clumsy.

In statement on Thursday, the GNC explained that such speeches ignite conflicts, encourage hatred and block the dialogue process, requesting an apology from Tobruk Parliament.

In his address to the UN General Assembly, Aqailah described the anti-Tobruk revolutionaries as extreme terrorist militias carrying out foreign agenda, accusing at the same time the GNC of supporting pro-Al-Qaeda militias.

The head of Tobruk Parliament continued to plead the international community to arm rogue General Khalifa Haftar's forces in order to eradicate what he described as terrorists out of Libya. Aqailah is a close ally of Haftar.

The GNC refuted these allegations and called them lies and irresponsible statements by one of the parties of the UN-brokered Libyan dialogue. The GNC also urged the UNSMIL and all participants and supporters of the peace process in Libya to have a firm stand towards this hate speech.

The GNC also emphasized, in its statement, that they were doing their best to push forward the peace process in order to bring Libya to safety. The statement also insisted on the constructive dialogue away from hatred and hostility to achieve a balanced peaceful settlement to stop bloodshed and bring security and prosperity for the Libyan people.