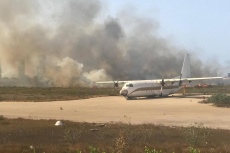 The Libyan Army's Volcano of Rage Operation of the Presidential Council has announced shooting down a Chinese Wing Loong drone provided by the UAE to Khalifa Haftar's forces in the area between Abu Grein and Al-Wishka, southern Misrata.

The media office of the operation said that the Air Force of the Libyan Army intercepted the UAE's drone and shot it down.

It said that Haftar's warplanes tried to strike the downed drone in order to wipe out evidence about its type, but eastern and southern frontlines' forces foiled the attempts.

The shooting down of the drone is a critical U-turn as it shows Libyan Army as ready to deprive Haftar's forces of their airpower that has caused lots of damage in civilian lives and properties in southern Tripoli.

Meanwhile, Haftar's forces retaliated for the drone loss by shelling Mitiga Airport in Tripoli with Grad rockets, leading to suspension of flights, according to the Airport's management.

The flights resumed hours later after no damage was reported.

According to a military source, the source of the shelling was coming from Khalit Al-Furjan in southern Tripoli.