Storage tank No. 12 of the Harouge Oil Company on fire 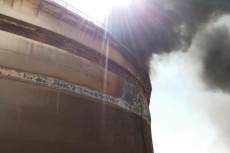 The National Oil Corporation (NOC) reported that storage tank No. 12 of the Harouge Oil Company in Ras Lanuf has been significantly damaged as a result of the armed clashes at Ras Lanuf and Sidra port terminals.

In a statement on Saturday, the NOC called for the unconditional and immediate withdrawal of Ibrahim Jadran forces from both oil terminals to prevent what it called “an environmental disaster and further destruction of key infrastructure.”

“Further damage to these oil sites could have a huge impact on the Libyan oil sector and the national economy.” The statement reads.

The NOC statement also called on all conflicting parties not to use the oil sector and associated petroleum facilities in a political game and to spare them from all possible conflict.

“Any act that endangers life and sheds Libyan blood should be condemned by all. These facilities belong to the Libyan people and are crucial to the future prosperity of the country.” The NOC said.

Meanwhile, Dignity Operation is mobilizing forces in Brega and Ajdabiya towns to launch a counter-attack on Jadran forces and retake the two oil terminals of Ras Lanuf and Sidra.

The chief of so-called Petroleum Facilities Guard (PFG) Ibrahim Jadran launched Thursday a military operation in the oil crescent region and seized Ras Lanuf and Sidra oil ports from Dignity Operation, which he labelled as “a terrorist entity.”