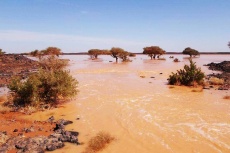 Heavy rains hit the city of Ghat south-west of Libya, near the Algerian border, last Monday, sweeping away entire neighbourhoods, closing roads, and causing power and communication breakdown in most parts of the region.

Ghat Municipal Council of Ghat sent a distress call to the authorities and local and international organizations in order to provide urgent assistance to the victims of the floodings, declaring the city a disaster at all levels.

Floods hit 70 per cent of the region, including, Ghat, Birkat and Fuwit areas. The municipality warned of a health disaster after sewage mixed with rainwater flooded the residential areas.

"The floods have caused the death of two people and the displacement of more than 600 families, in addition to 24 people are still reported missing," the Municipal Council said.

For its part, the Libyan Red Crescent Ghat branch confirmed that over 600 families have been relocated in schools, 45 other families from the worst-hit Tenjraben, were evacuated to safer areas, warning that the numbers of displaced people are on the rise, as the flooding continues to batter the city.

Flood-relief operations are being carried out by locals, consignments of aid-relief arrived at Ghat from numerous agencies, including the Red Crescent of Ubari, Ubary Solidarity Fund, and the Municipal Council of Wadi Ataba, while victims of the intense flooding said they had received no form of help from neither governments of the west or east, including the east-based interim government who is supposed to be responsible for providing services, after the takeover of the so-called Dignity Operation of the region.

The United Nations Office for the Coordination of Humanitarian Affairs in Libya (OCHA) said Tuesday that the devastating floods have affected nearly 20 thousand people, emphasizing the need for emergency food-aid-shelter-relief for the victims.

On the official level, the Presidential Council (PC) decided to allocate 10 million dinars, under miscellaneous expenses, in accordance with the legislation in force, to address the situation in the city and to provide the urgent necessities, according to the Information Office of the PC head on Facebook.

The Municipal Council of Ghat and the National Meteorological Centre warned that weather fluctuations will continue for the next two days, warning of more floods and further escalation of the crisis.