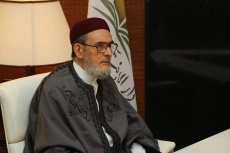 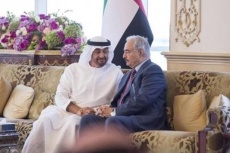 The United Arab Emirates, Saudi Arabia and their "Yes Sir" voices, Egypt and Bahrain, devised overnight a blacklist for what they said terrorists and terror entities funded by Qatar.

The list included some Libyan names and the common thread among the names was that they were all religious figures or anti-Dignity Operation individuals.

The list, which the UAE and Saudi Arabia said is black!, named Ali Salabi, who is a religious figure and is a member of Muslim Brotherhood known for his religious works and dawah on TV and different arenas, as a terrorist funded by Qatar. Fun Fact: Saudi TVs have even blurred Salabi's face when he appeared on their TV in a religious Ramadan show!

On the list as well, Abdel Hakim Belhaj - the Chairman of the Libyan Watan Political Party. Mahdi Al-Harati – a Libyan-Irish national who fought in February revolution as part of Tripoli Revolutionaries Brigade and then in Syria as part of Liwa Al-Ummah, then became Tripoli Mayor before he left the country. Finally on the list, Al-Sadiq Al-Gharyani - the Libyan Mufti and a religious scholar known for his calls for reconciliation and peacemaking as he appears on TV in a weekly program. So all those five figures were named by UAE, Saudi Arabia and others as terrorists and as individuals funded by Qatar, however; nowhere on the list one can find real blood thirsty figures from the eastern part of Libya (those related to the eastern government and parliament). Why? All because eastern Libya is our thing, the UAE, Saudi Arabia, whisper!

Libyan CIA-linked and current militia leader and destroyer of peace, security and houses in Benghazi and elsewhere in eastern Libya, Khalifa Haftar is not funded by Qatar, UAE and Saudi Arabia are funding him in the day light and thus he cannot be added on the blacklist. He can kill, assassinate, murder, abduct, dig up graves and do whatever he pleases, he is not funded by Qatar. He is only funded by the UAE and Saudi Arabia, that is fine! Why are Haftar and other figures from the eastern government not named on the list? Maybe because the UAE and Saudi Arabia are neck-deep in providing military and financial support for them to topple over the February revolution and any subsequent free state!

Yes is the answer. Only last Friday a report by the UN disclosed that the United Arab Emirates had violated the UN arms embargo on Libya by providing air power for the forces of Khalifa Haftar in eastern Libya. The UAE had built up an air base at Al Khadim in eastern Libya as well as providing Haftar and his forces with fighter aircraft and military vehicles. Is this not terror? But it is fine, as long as it is not Qatar!

Regarding Saudi Arabia, it is well known in Libya that they are trying so hard to spread madkhalism and salafist views in the eastern region with the help of Dignity Operation led by Haftar, who warmly welcomed the Saudi cleric of Palestinian origin, Osama Ataya Al-Otabi, who went around the eastern towns and cities and delivered religious lectures and Friday sermons to legitimize the actions of Dignity Operation militia groups and criminalize their opponents. So, the question keeps begging for an answer: why are the UAE and Saudi Arabia backlisting alleged terrorists from Libya for links with Qatar when they know that they have so far been the main if not the major player in destroying eastern Libya – Benghazi in particular – and in hindering the peace and security process by providing financial and military backup for one party over the other in Libya?