The UN Special Adviser on Libya, Stephanie Williams, said on Friday that she met with French officials, including the French Special Envoy to Libya, Paul Soler during her visit to Paris Thursday.

"We.. agreed on the absolute necessity of maintaining calm on the ground, and supporting dialogue between stakeholders with differing perspectives," the UN Rep wrote on Twitter.

Williams briefed the French side on the current situation in Libya, including the consultations held in Cairo two weeks ago between the Joint House of Representatives and the High Council of State Committee, and disclosed plans to hold another follow-up meeting in mid-May in Cairo.

"We discussed the importance of supporting the electoral/constitutional track in Libya in order to hold national elections on the basis of a solid constitutional framework, as soon as possible."

Both sides agreed on the necessity of maintaining calm on the ground and supporting dialogue between all stakeholders with differing perspectives, according to her tweet.

03-12-2022
President Bazoum: Libya has become an open-air market for weapons

24-11-2022
Borrell: No indications of an agreement on elections in Libya 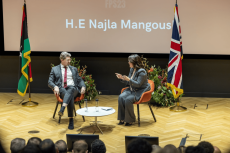