Libya is close to joining the Trans-Saharan gas pipeline (also known as: NIGAL pipeline) that transfers gas from Nigeria to Europe, a boost necessary for Europeans amid the current energy crisis despite the development of another ongoing pipeline project that connects Nigeria to Algeria.

The Oil and Gas Minister Mohammed Oun said last Sunday that they had given the Government of National Unity a study regarding the NIGAL pipeline that pumps gas from Nigeria to Europe, and according to the relevant authorities, it would pass through Niger and Libya before the final destination: Europe; a route that goes at odds with the route agreed on by Algeria, Nigeria, and Niger.

The chances for Libya to be part of the NIGAL pipeline project are slim despite ongoing negotiations on its viability with Nigeria, particularly; between Libyan and Nigerian officials and African Oil Ministers in a recent ministerial meeting for OPEC members. However, the security situation in Libya still encumbers the project.

Algeria and Nigeria signed on July 28 an agreement to officially start the pipeline project: 4000 kilometers long, to transfer gas via Niger from Nigeria to Algerian coast and then to Europe.

Likewise, Morocco signed an MoU with Nigeria and West Africa countries on September 16 to build a gas pipeline: 5660 kilometers long; that transfers gas to Europe despite difficult logistics as the pipeline would go through 15 countries in West Africa before reaching Europe. 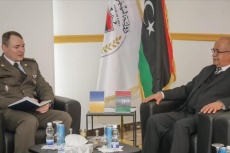